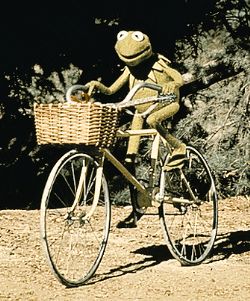 The Rowbike is part bicycle and part rowing machine. Originally designed in 1993 by Scott Olson, founder of Rollerblade, the Rowbike may not instigate a fitness craze like inline skating did, but it does have a dedicated following that includes Kevin Costner. Yes, its true, Kev uses one.

A session on this arm and leg powered machine is referred to as ‘Rowling.’ This is not a stationary bike, this baby moves. People have been using it for physical therapy, commuting and workouts.

If Kermit the Frog on a traditional bike wasn’t enough to make you giggle, the thought of him rocking this machine should have you falling off the lily pad. But lets face it, if your a serious biker you already wear spandex, so how modest are you really?

Available in four models, the Rowbike will set you back anywhere between USD $750 – $1,200. The Rowbike reportedly takes a little getting used to, so find a safe wide-open area to get your ‘rowl’ on. Once you’re rowling (last time I swear) you are sure to turn heads and the effectiveness of a rowing workout is undeniable. An hour on the Rowbike is reported to burn approximately 850 calories!

Here are the benefits listed on the Rowbike site: