Okay, confession time!  I don’t know much about fetishes, but I think I have developed a wetsuit fetish.

One of the things I love about doing triathlons is wearing wetsuits. I love open-water swimming, anyway, with or without a wetsuit. I am a Pisces and maybe that has something to do with it. But, with a wetsuit, you get more buoyancy (so you have to do less work to stay afloat), get more streamlined (so you fight the water less) and basically I swim at least 10% faster when I wear a wetsuit. 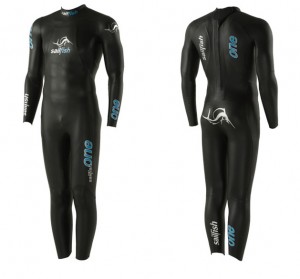 But, it’s more than that.  Without trying to change the tone of this wonderful, gadget-obsessed, slightly geeky blog, I am going to go out on a limb and say that I think wetsuits are sexy. Not sexy in any kind of immediately obvious way (you know, all wrapped up in black neoprene and stuff), but sexy in the sense of making you feel more powerful, more capable, more like…well, a superhero or something.

Tell me you don’t think you would swim faster, look cooler and generally feel more sexy in that Sailfish One over there. Am I right or am I right?  Maybe I’m totally crazy and it’s time for me to get a new hobby. But, if I’m crazy, then why did they put that Sailfish graphic on the butt?  Just answer met that.

As a coach with Swim for Tri, I am lucky enough to have been given some awesome deals on some awesome wetsuits. And, this year we are sponsored by Speedo, so we have been given a pretty nice range of Speedo wetsuits to try out. I have tried (and loved) the Speedo STR Pro, which is probably the best-fitting wetsuit I have ever worn.  I am looking forward to wearing it in my races this summer, and I am counting on it (and it alone, without needing to do any more serious swim training) to make me swim faster than I have ever swum before.

And then, the other day, I had a revelation. I tried the Speedo Thinswim 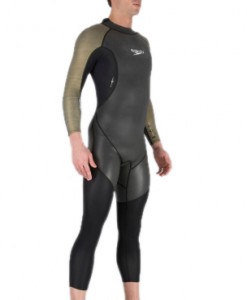 wetsuit when I was coaching at a swimming pool early one morning. I had encouraged everyone to bring their wetsuits to the pool so that we could talk about putting them on, taking them off, and how they change your front crawl technique. I brought the Thinswim because I didn’t want to be wearing a wetsuit of normal thickness (Thinswim is about 1mm thick whereas most wetsuits are about 3-5mm thick) all morning and get dehydrated while I was coaching.  But, here’s the revelation: once I got the Thinswim wetsuit on, I did not want to take it off.

It makes me want to swim around the world, if only to have an excuse to keep wearing the Thinswim for months at a time.  So, that’s gotta be a good thing, right?

Even as I type this, I am debating the pro’s and con’s of stuffing it in my backpack as I set off for the Alresford Music Festival, just on the outside chance that I get a chance to wear it at some point this weekend  – a weekend which, I might add, my daughter has banned me from all triathlon-related activities.

So, just to finish off the sordid picture I have drawn for you, I have been reduced to sneaking around behind people’s backs so that I can get a few minutes of sheer multi-sensory delight with the Thinswim.   Maybe it will rain really heavily and it will make perfect sense for me to walk around in a wetsuit.  Maybe there are worse things to be obsessed with.